Of Flounder and Fathers

I encountered my first flounder as a young child. Not in the ocean, but at Oyster Creek Restaurant on my birthday. Battered, golden brown, delicious, on my fried seafood plate. Next to the french fries, cocktail sauce, tartar sauce, and a lemon wedge.

My first encounter with a flounder as a whole, living fish creature came later.

Dad aka "Wild Bill" in his prime, working the bull float.

Being a concrete finisher has strange perks. Dad knew every back road in the tri-state area of New Jersey, Delaware, and Pennsylvania. Every bridge, overpass, and culvert. How? Because he helped build most of them.

Armed with this unusual knowledge of the infrastructure, dad made every car trip an adventure. Anywhere we drove, at some random spot, dad would suddenly turn down a decrepit back road. The detour invariably opens up to a waterway spanned by a bridge. 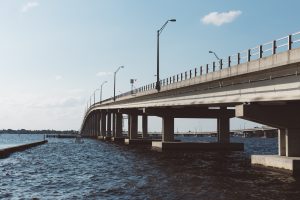 would look wistfully at his handiwork and recall some anecdote about that particular job. Something like, "Yep, we built that in '77. Carmine Zucchini got drunk on a bottle of Jack, forgot to hook his safety harness, and fell ten feet straight down into that river. They had to fish him out of the mud a half mile downstream. He was all cut up with shells. Good thing it was high tide.  He should have cracked his skull. That dumb bastard is lucky to be alive."

Always some comedy or mishap. Dad remembered the when, the where, and the who from every single construction site. He was a Bard of Bridges. Dad took great pride in his work.  He built things people need and use every day.  Not everybody gets to make a permanent mark on the world landscape.  Dad cared for his concrete creations the same way an artist loves their masterpieces.

I appreciated this more and more as I grew older.

Undeveloped construction sites brought dad to remote locations in the wilderness. Dad built roads and highways and bridges across untamed landscapes. As he broke his back shaping concrete, dad made civilization. He often worked over waterways.  While working, he would survey the area wildlife for months at a time.

We always had the best crabbing spots. He knew just the place to find wild mushrooms. Or spy giant snapping turtles. Or harvest endless cattails. Or dig clams. Or pick mulberries, wild cranberries, wild blackberries, wild blueberries, and wild gooseberries. Or mouth-to-rock drink ice-cold water from a natural spring. We saw a herring run so thick you could grab the fish with your hands. He knew of a secret, real-life clay pit (which was fun, until my foot got stuck in the clay and pops almost drove the Impala away without me.) Dad gathered information with his eyes while he worked. He had an encyclopedia of "secret spots" beyond the wildest imagination. We delighted that any trip could turn into a strange adventure. 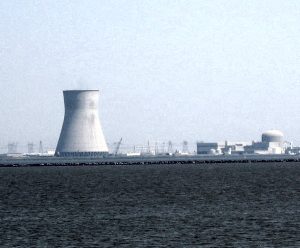 One job site was unusual, even by dad's standards. He helped build the Salem Nuclear Power Plant in Salem, New Jersey.  He built the access roadways and smoothed the walls of the giant cooling towers.  After the first reactor went live, fishermen start showing up. They were fishing in the area where the water exits from the reactor cooling system. The hot water expelled from the reactor raised the water temperature up over 10 degrees, creating a fish oasis. Who knew? Nuclear reactors make for a great fishing spot.

My father is so excited about this bit of information he can hardly contain himself. He was no fisherman. But fishing in waters warmed by the glow of a controlled nuclear explosion? He knew something magical would happen. He buys us cheap K-Mart fishing rods, hooks and weights, and we head off for the nuclear plant that weekend.  I always got to say things like that to my friends;  "Sorry guys, can't play. Dad's bringing us to a nuclear reactor drainage pipe to catch fish."  I had the coolest dad in the world.

As promised, the bridge was packed with fishermen. Armed with our secret knowledge of this spot, my 9 year old mind has fantasies of catching a world-record swimmy thing and eating nothing but fish sticks for a month.

As we walk along to find a spot, we pass a fellow fisherman. There is something in his white 5 gallon bucket. Dad walks up, chats with the guy for a second; guy smiling broadly, dads eyes wide in disbelief. "Do you mind if I show my kid? Billy, come see this!"

I couldn't wait to see what this guy had brought in.  I look excitedly into the bucket.

Something is terribly wrong.

Horrified, I reel back, grab dad's arm, and urgently whisper, "Dad. Oh my god. No. I don't want to go fishing here. Let's go home. We have to go. Now!" 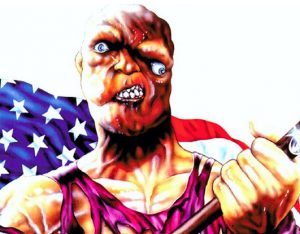 What I saw in the bucket was something from a horror movie. It was a fish. But that fish was not right in any way. It was mutated. Twisted features, flat, eyes on one side, sideways mouth agape with snaggly teeth pointing out in random directions.

Both its eyes were looking at me at once. Both his eyes. Both at once.

It was good that the fisherman put this tortured mutant fish soul out of misery.

It was obvious what happened here. The radiation from the nuclear plant genetically mutates fish. Soon, an alarm would sound, government officials in white protective suits will usher us into military vehicles, drive us away to some facility, and inject us with iodine-or-something.

Dad looks at me confused for a moment. Then he realizes what is happening.

As dad works past his belly laugh, I tug at his arm frantically. Fear in my eyes, shaking my head "no."  We needed to get out before it was too late.

He finally catches his breath. "Calm down you dummy.  Billy, that's a flounder. That's what they all look like. Their eyes twist over to one side so they can sit on the bottom and see everything above them. This is the fish you eat at the Oyster Creek Restaurant every time we go. It's normal. They all look like this. C'mon, the guy told me what they use for bait. Let's see if we can get one to bite."

It was an honest mistake. 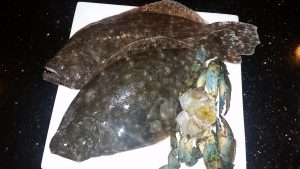 Flounder taste good. But they look like a genetic mutants spawned by toxic nuclear fallout. I suppose, if you're around them for a long enough, you might eventually be convinced to admit that flounder are actually kinda cute.

But it's a face only a father could love. 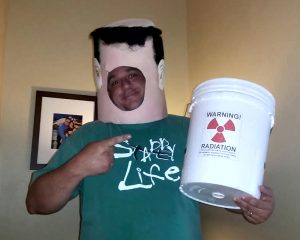 To see photos and stories from all of our fishy adventures, please "Like" our StabbyFish Facebook Page.  Wishing you a Happy Father's Day from everybody at StabbyFish.com.

View all posts by: william frederico